In the last week of July, Turtle Foundation Camp in Lacacão was invaded by this sense of mission, urgency and excitement! A research project, led by Dr. Christophe Eizaguirre and Victor Stiebens from the University of Kiel, a collaboration with Turtle Foundation and the INDP (National Institute of Fisheries Development), required the placement of three satellite trackers on loggerheads in Boavista. 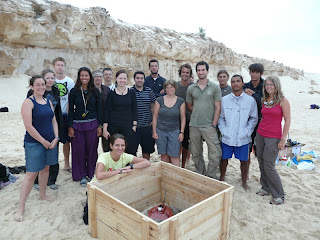 With the season taking off with a slow start, but research needs a priority, a set of invited scientists with a tight schedule waited with impatience night after night for three shelled candidates for a satellite transmitter. On the second night (23rd of July) luck struck us, and around 4am the team got warned that a turtle was nesting in Curralito beach. This was double luck for us, as not only it meant that we would only finish our work with the turtle with the sun rising, but also that everyone in the camp could come and see it once it was released back in the ocean. 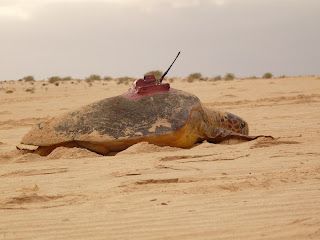 All work was done under the close supervision and guidance of the experienced Dr. Gail Schofield (University of Swansea, UK). The next two transmitters didn't get placed until the 25th of July, but once again, on a lucky night, two turtles came ashore almost at the same time, this time in Lacacão beach, this time early in the night. We all sighed with relief, and were very happy with this sense that the hardest part of the field work was accomplished. 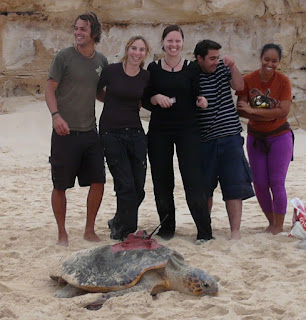 Now the research will continue. The transmitters are obtaining information about water temperature, salinity among other physio-chemical properties of the ocean water, while movements of the turtles, both inter-nesting and post-migration will be recorded. At the beach, information about physical condition of the nesting sea turtles, parasite presence as well as a genetic study is still taking place by the researchers of the University of Kiel, who will remain with us most of the season at the Lacacão Camp.

We are very thankful for the trust deposited in Turtle Foundation by all members of the research team. We wish all of them good luck, and good work!!

Other Blogs of Interest